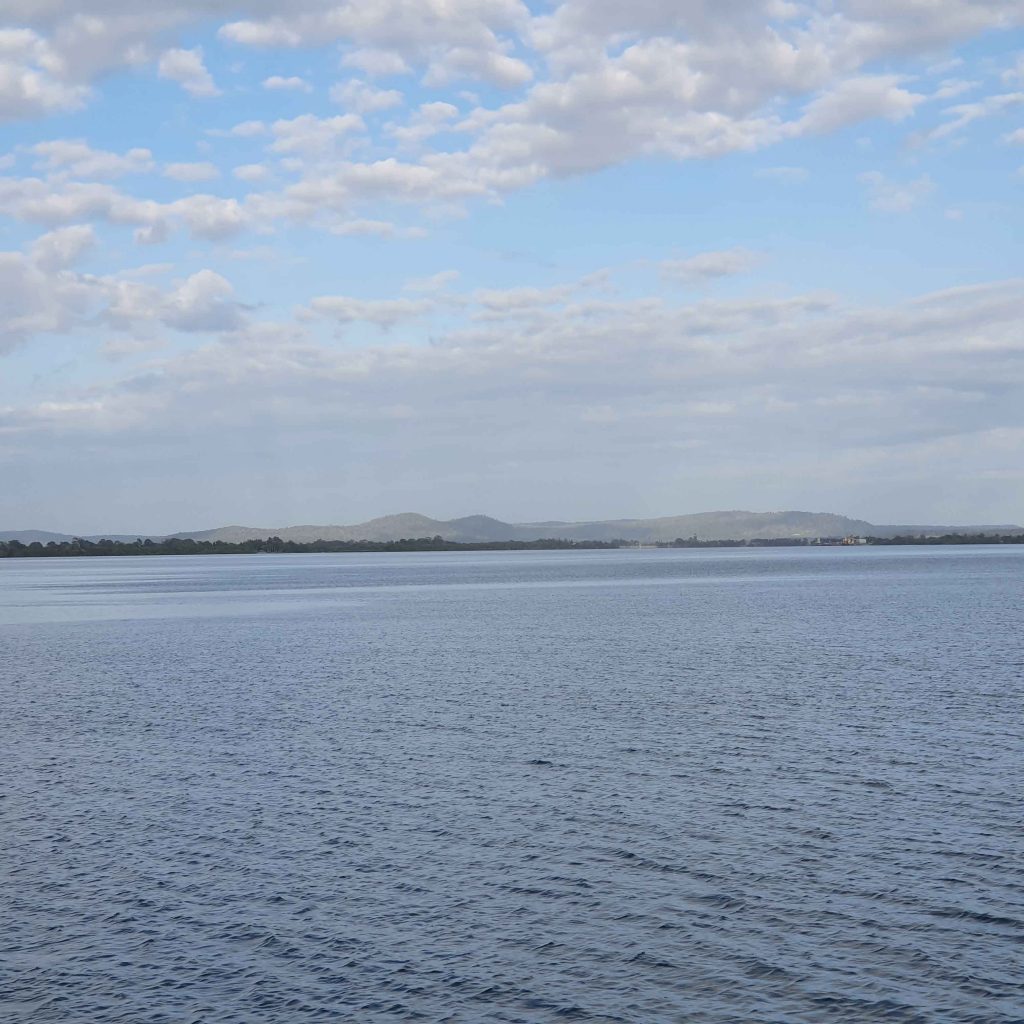 It’s long been a dream of mine to cruise the Clarence River, after first visiting the region in the late 1980s. Also, the various brochures I’ve read have been completely accurate that it is ‘an area of astonishing beauty with lush farmlands, rich rainforests and golden beaches’.

This post is about the time we spent on the Clarence River at Iluka and Yamba, and our short cruise upstream. And I’ve also included some photos around Ballina, from one of our road trips.

We stayed on anchor at Iluka for five days. During this time we had a great lunch at the local pub, kayaked to Moriarity’s beach for a swim, experienced winds in excess of 80km/hour resulting in us spending time ensuring we weren’t dragging our anchor and nor were others in the bay, and I took my first solo trip in the tender to the dock to dispose of our garbage. Those people who know me, know that I’m a ‘have a chat’ person. So during my solo trip I did just that, after helping secure lines for a couple when they motored their yacht to the dock. When I got back, Robert mentioned he’d got the binoculars out to check that I wasn’t experiencing issues with the tender/motor!

Unfortunately, during our time at Iluka we also started to have problems with our generator (indications of overheating), which resulted in an abridged trip upstream of the Clarence River. This was because we couldn’t ensure our batteries were charged enough to spend days on anchor or at places where no power was available.

On the morning of 25 November, we set out for Maclean. While I’d initially planned a few nights on anchor and a few nights at pontoons, due to our generator issues, we decided to stay mostly at places where we could access power or didn’t need to use our anchor.

Maclean is Australia’s Scottish town, with hundreds of tartan-painted power poles. It’s about 12 nautical miles to Maclean and took us under 2 hours from Iluka. We passed Goodwood Island, Harwood Marine, and the Harwood Sugar Mill, which is the oldest continuously operating sugar mill in Australia and has been crushing cane since 1874. We also passed under the two Harwood bridges:

When we arrived at Maclean, one of the two public pontoons was vacant so we brought the boat in and tied up here. I should also point out that we’re still novices at this manoeuvre, but I was very happy that we did this well, with good communications and using the wind in our favour. There’s both power and water available on the pontoon, very well-stocked Spar and IGA supermarkets a short walk away, and a great butchers across the road. There are also public toilets and a shower near the pontoons.

There’s also a public park – McLachlan Park – adjacent to the pontoons with a covered gazebo, BBQ and seating. I think this becomes a gathering spot for some of the locals to sit and have a drink. It’s definitely a different side to life than what I’ve experienced. Once tied off, we spent some time chatting with the locals, including Garret, who’d been celebrating an 18th birthday (from the previous night) and was at the time enjoying a cask of fortified wine (port), which he was decanting into empty water bottles to share with his friends. It’s hard for me to describe the amusing elements of our conversation, but it included Garret telling us he was on holidays (many, many times), telling us he’d recently become a grandfather (and was very proud) and stripping down to his jocks to jump in the river and cool off. He also referred to Robert as ‘Uncle’ (a sign of respect paid by an aboriginal to an elder in their community).

I went for a walk to see the sights and visit the Maclean Museum and Stone Cottage. It sounded interesting because the cottage is furnished in the style of the time – 5 rooms, a music room, parlour, 2 bedrooms (one designated as a children’s room) and a kitchen. There’s also a separate museum holding an aboriginal showcase, many farm implements, a hospital, a schoolroom and many changing displays. The website indicated it was open Wednesday but unfortunately when I got there the sign said ‘closed until further notice’. I guess we’ll put that down to COVID.

So I decided to check out the Pinnacles and the Lookout. It was a rather hot day and the fundamental problem with most lookouts is that they’re always uphill! But the view across the region was special and worth it.

Our next stop was Cowper.

During our route from Maclean to Cowper we hit the bottom. Luckily it was only sand (not rock bottom) but it was frightening to think that the tide was going out and what if we couldn’t get off. I had visons of the boat tipping onto her side, like the one in the accompanying photo – NOT POSEIDON!

I take full responsibility for this because I’d planned the route using our Garmin – or maybe I’ll blame the technology! Being further from the ocean, the Garmin doesn’t give sufficient detail about the depths. I quickly launched Navionics app on my phone, found the deeper water channel and Robert kept a slow but steady pace and we managed to move to that deeper water.

It’s fair to say I was quite shaken and very annoyed with myself.

But I’ll try not to dwell on this and instead, share a quote that a friend posted on her Facebook page from Don Bamford: Only two sailors in his experience never ran aground. One never left port and the other was an atrocious liar!

As a lesson learnt, we’ve started using the Navionics app more, and worked out how to copy a route from Navionics to the Garmin. This will be especially useful for inland waterways. I’ll still plan my first cut of a route using charts when we’re at sea, but will cross reference with Navionics to create a route. As an aside, some friends were joking about the number of waypoints I have on my seagoing voyages. The Navionics-generated automatic route came up with 56 waypoints between Maclean and Yamba (about 1 every 350m)!!

Photos taken between Cowper and Maclean

Shortly after we’d arrived at Cowper Pontoon, a small yacht came in and secured on the other side of the pontoon. We never saw the owner until later in the day – after dark – when he started to abuse us. We were “f@#$ing stinkboat owners”, shouldn’t have been on the pontoon, should have given him more room, and so it went on and on and on! We did say that if he’d let us know, we would happily have shuffled along the pontoon for him, and looking at the photos, we could have moved back about a metre, or forwards a few metres, but we actually thought he was happy with the spot he came in at. Again later, he started abusing a speed boat owner and yelling at the water about the splashing, which I can only think were fish jumping (or maybe the bull sharks we keep hearing about but haven’t seen). Writing about it now makes it seem a bit trivial really, but when you’re on an isolated pontoon with someone behaving in that way, it does make you worry whether he might try to do something to us/our boat. We didn’t sleep very well and at 1am I noticed someone standing outside our cabin. Further investigation showed it was someone fishing, not the guy from the yacht.

After a restless night at Cowper, we headed back to Maclean. When we arrived both pontoons were occupied, but there was enough room to share the pontoon with a catamaran, the owner who we’d chatted with previously at Maclean and then later again on the river.

This was another first for us – reversing onto the pontoon with another boat behind us. While there were no issues, it took me a couple of tries going in forwards to realise that it was better to reverse in due to the wind direction (which Robert suggested in the first place). I initially had thought it would be easier to go front in, but I just couldn’t manage the angles properly. But, our friends from two days ago were celebrating along the waterfront and together with the owner of the catamaran, helped with the lines.

During the afternoon we continued conversations with the locals and we met Pam, who’d had a few drinks and was telling me some of her stories. I felt quite sad for her, thinking about how her life would turn out. After some time, the others started referring to me as ‘the good Pam’ and her as ‘the bad Pam’. They also complemented me on my nice teeth!! By evening, uncle Ivan – who apparently lives on Ulgundahi Island (owned by Yaegl Local Aboriginal Land Council) decided he was going to sleep in his tinnie. He ended up leaving about 4am. Might I say, pulling chain into an aluminium tinnie creates a lot of noise! But we were planning on leaving early to get to Yamba Marina on high tide and before it got too windy.

We had planned an early start to Yamba to arrive before the winds picked up. One of the things we suffer from is ‘windage’ – because we have a high superstructure – which makes it challenging to enter tight spaces like harbour berths when there’s too much cross wind. But with some help from Dale (on Rum‘Un) and another Dale securing lines, we got into our berth. One of the things I’ve noticed is that everyone offers a helping hand, including Jennie from Me and Mrs Jones (& every time I see her boat I hear that song in my head).

Photos taken on our way downstream to Yamba

We’ve been  enjoying a few kayaks, bike rides (me only), dinners out, and we hired a car for a couple of days. During this time we went to Ballina and explored more of Yamba, including the area around Angourie Point, 5km south of Yamba. There are two amazing pools, unfortunately closed due to algae blooms, but if you’re interested read more about the Angourie Blue and Green Pools.

Of course there’s ongoing boat work, like cleaning the ash (from burning canefields – this is Australia) off the decks, cleaning the stains off the hull and I also took the bimini off to scrub it. It was showing signs of mould and some seagulls had decided to use it as a toilet! We’ve also had a mechanic looking at the generator issues and he’s waiting for some parts that will hopefully arrive before we leave Yamba.

Photos during road trip to Ballina

Now that the Queensland border has re-opened to all of NSW (and no paperwork required), we’ve been checking the tides and weather forecasts. It looks like on Thursday 10 December we’ll be heading for the Gold Coast!