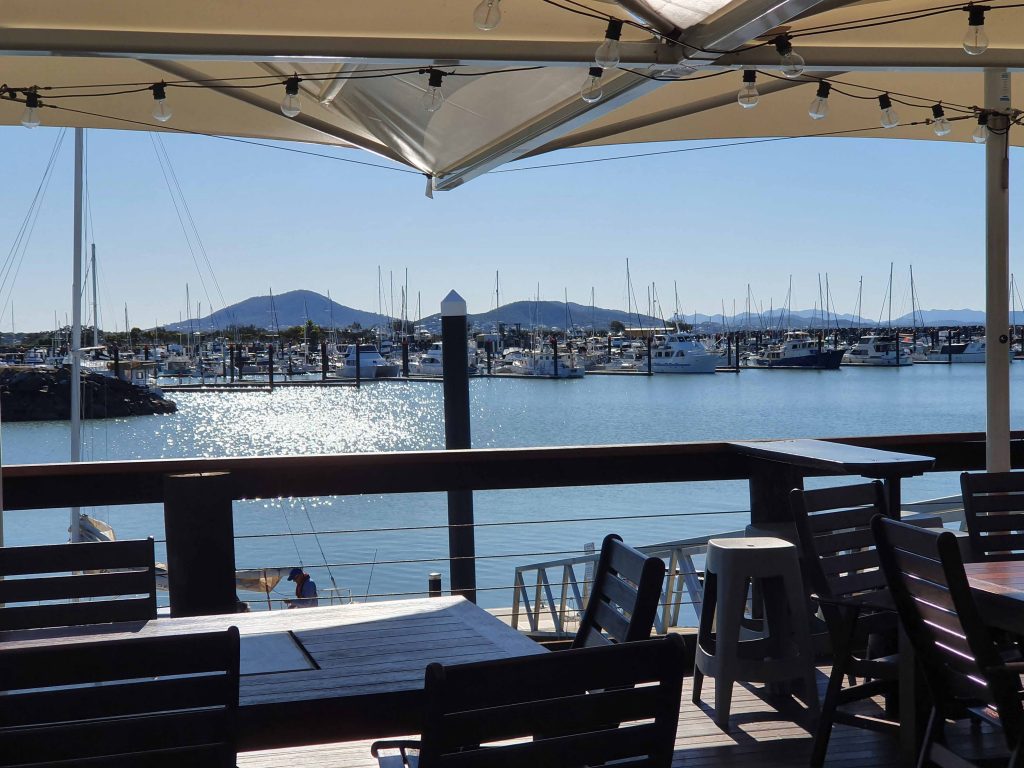 This post covers our trip from Gladstone to Keppel Bay, via Hummocky Island.  We continue to head north seeking warmer weather as I explained in my previous blog, winter is coming, and after passing the latitude of 23°26′11.4 we are officially in the tropics!

Our cruise from Gladstone to Hummocky Island

After six days at Gladstone Marina, it was time to leave. There’s a number options for exiting the Gladstone Port area, including the Narrows and the North Channel.

The Narrows is known for its famous Cattle Crossing half way along the length of the channel. This is where sandbanks dry to as high as 2 metres above water, allowing cattle to be driven across. It’s a navigable channel if you time your passage to make use of the tide, and especially during spring tides. In his book ‘Cruising the Coral Coast’ Alan Lucas provides an excellent description of the Narrows and how to plan your route successfully through this area.

But spring tides had passed, and when we chatted with the helpful staff at Gladstone Marina, it seemed that maybe it wouldn’t be deep enough for us to take the Narrows, so we took the North Channel instead. The North channel runs between Curtis and Facing Islands and has navigation markers helping to guide the route.

We still timed our departure to be for about an hour before high tide being aware of some shallow areas but I don’t think we saw less than 2m underneath Poseidon the whole way through.

After exiting the North Channel, we passed Cape Capricorn, named because it lies close to the Tropic of Capricorn.

These photos are highlights of our trip through the North Channel and approaching Hummocky Island. Then also a slideshow of more photos I took because I had trouble deciding which ones to include!

Slideshow of our trip from Gladstone to Hummocky Island.

Hummocky Island is about 7 NM northwest of Cape Capricorn.

We arrived at a lovely secluded bay with a sandy beach, dropped anchor and set the flopper stoppers. Shortly after we were joined by a number of other boats, including two from the Cruising Queensland Facebook group, Bonafide and Dreamagic!

Two of the crew from the latter boat came by and suggested sundowners on the beach at 4pm. We enjoyed what I referred to as my surprise birthday party (as much a surprise to Robert as me) with the crew from these two boats!!

Here’s a short video of our anchorage at Hummocky Island and the location on Google maps.

From Hummocky Island we headed to Keppel Bay Marina. Here’s a short video, a map showing the location of Keppel Bay, and some photos taken along the route.

We planned to stay at Keppel Bay Marina for about a week, but due to inclement weather, stayed for 11 nights. There are some amazing walks in this area and we managed to do our 6000 steps (or more) on most days.

The local bus service was great and we took the bus to Yeppoon and Emu Park. We also decided to hire a car for a few days from Little Johnny’s Car hire. At $50 per day it was a bargain! This meant we could easily visit Rockhampton, Capricorn Caves, Baga National Park, and Yeppoon. Stay tuned for a blog showing these places!

After exploring the region, we’re heading to Mackay.