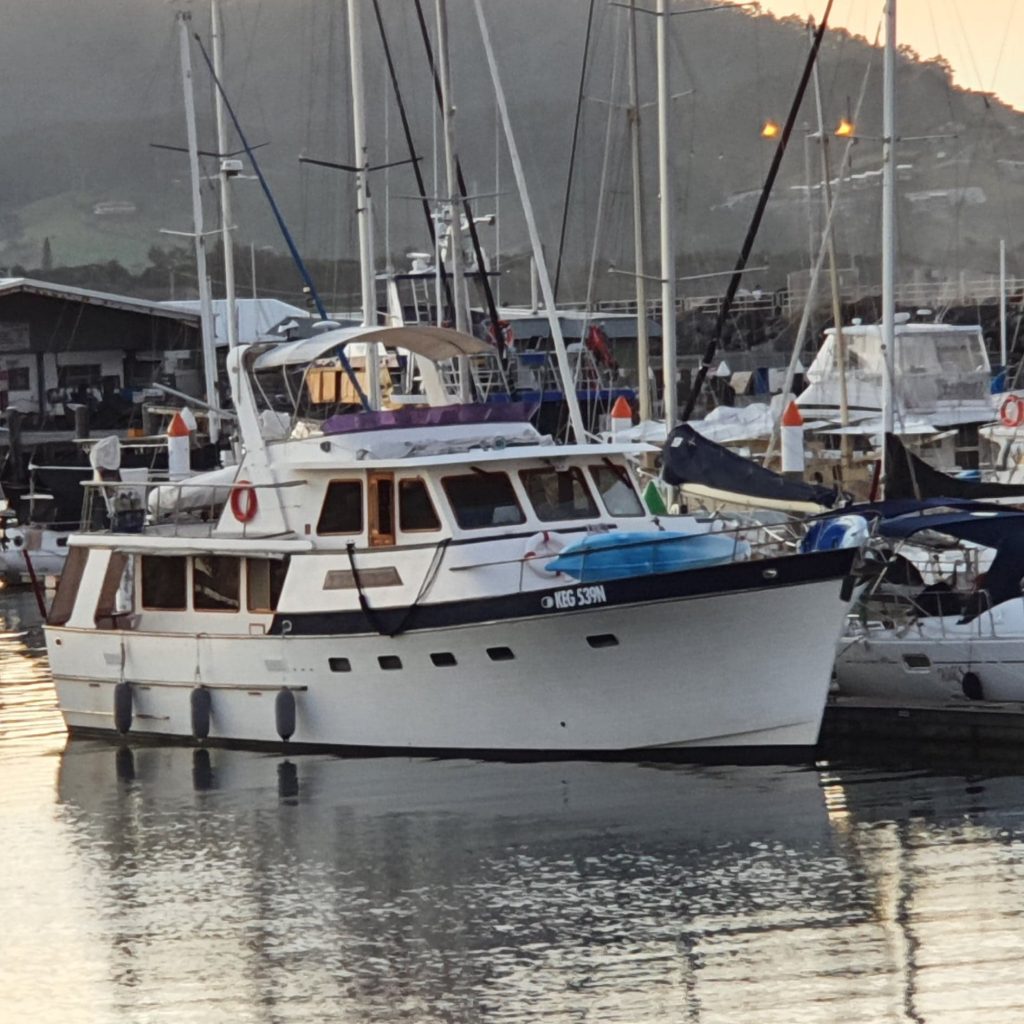 After about 3 weeks at Soldiers Point Marina, the weather improved enough for us to travel from Port Stephens to Coffs Harbour. Forecasts indicated 3 or 4 days of weather within our tolerance, that is, winds less than 15 knots and swell less than 2 metres. You may recall I wrote about this in my blog Passage Replanning. We decided to leave Sunday 2 August.

Our arrangement with Marine Rescue was a little more complicated than simply logging on and off for a day as we’d done before. This was because the transit from Port Stephens to Coffs Harbour would take 3 nights and nearly 4 days at our average speed of 8 knots. So the plan I discussed with Port Stephens was as follows:

This plan mostly worked well, although next time I’ll just log on/off each day. I think this would have been simpler as sometimes I wasn’t sure if this plan was passed from one base to another. However, we received great support along the way from Marine Rescue Port Stephens, Foster/Tuncurry, Crowdy/Harrington, Trial Bay and Coffs Harbour.

We left Soldiers Point Marina at 7:30am on 2 August, only a little later than originally planned. We’ll blame one of the cats – Radar – who decided to play hide and seek with us when we wanted to secure him in the cabin with his brother Vinnie! But my estimated travel time to Boat Beach was only 4.5 to 5 hours so a minor delay didn’t matter.

There was a sécurité’ broadcast over the VHF radio, covering two potential issues. One where a navigation marker had come adrift in the waters around Broughton Island and could pose a hazard. The second of a whale tangled in a fishing net and dragging 3 white buoys, with advice to contact marine rescue if sighted. This made me feel very sad and we kept a lookout but didn’t see him. Hopefully he’ll be rescued by the organisation Orcca, but we didn’t hear any more about him.

Our voyage up the coast was great. We enjoyed being on the move again and going to our first open road stead. Below you can see where Boat Beach is located, our route and stats for our passage. * When I replanned the passage, I changed the naming convention of my waypoints. 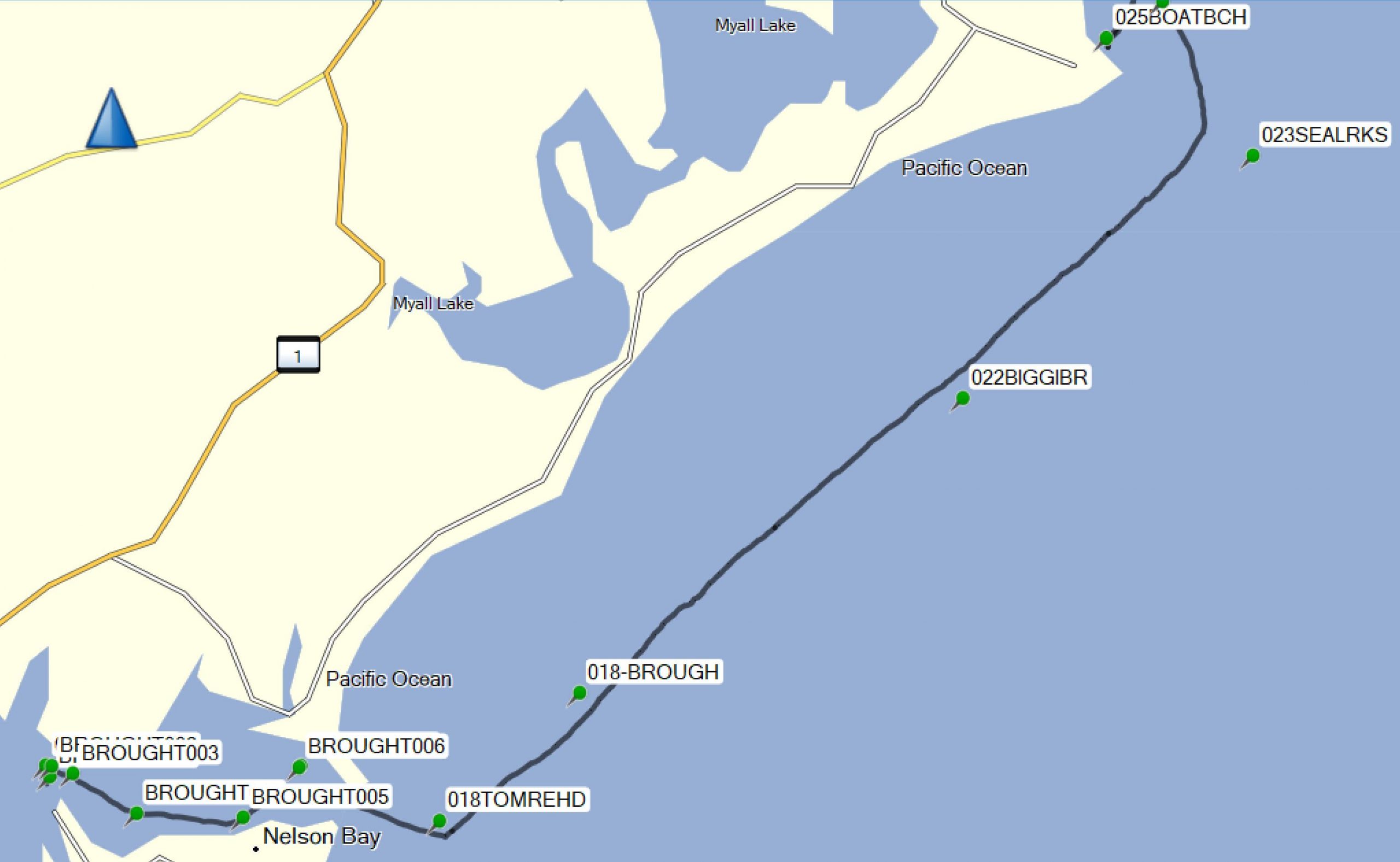 We arrived and set the anchor, laying out about 30 metres of chain. We had a good few hours of daylight to keep our eye on things and were pretty confident that we weren’t moving too much.

It’s fair to say the conditions were not ‘glassy smooth’ like one might have hoped for. In fact we were bobbing around a lot and rocking back and forth. We decided that since this was our first time in an ocean anchorage, we’d take turns staying up and keeping a close eye on our position. I snoozed earlier in the evening and my shift commenced at 9:30pm. The anchor alarm sounded twice in the first hour, but I checked everything and we were OK. Luckily we had a full moon and could see our position relative to the land.

We managed a few hours’ sleep during the night. In the end, the anchor performed perfectly and we didn’t really move from our position. However, we both experienced feelings of sea sickness and it was initially quite unnerving when the boat started rocking side to side. You definitely want to be sitting down when this happens!

Below are a series of photos I took between Port Stephens and Boat Beach.

We headed off from Boat Beach at 7am on 3 August after a light breakfast. We had no problems lifting the anchor. I had been a bit worried that it might get stuck, but given that we anchored in sand, obviously it wasn’t an issue! This voyage was a little slower this day because of the wind, swell and tide, so we averaged about 7 knots per hour. It was also a little chilly, so we spent some time motoring from the pilot house. But the swell was less than the day before, to the point that Robert was able to make us a cuppa while we were motoring along. (I shouldn’t have put my ‘keep cup’ in storage as it would have been very handy!)

During this trip we saw whales and I’ve included a few photos taken from a short video.

I was very interested to see what Crowdy Head Boat Harbour was like. I had been unable to find anything current on the web so I rang Crowdy-Harrington Marina Rescue who advised we could stay there, and take a free berth. They also said the minimum depth was 2 metres. Other people had suggested we avoid it, but we decided we wanted to check it out. Below you can see where Crowdy Head is located, our route and stats for our passage. 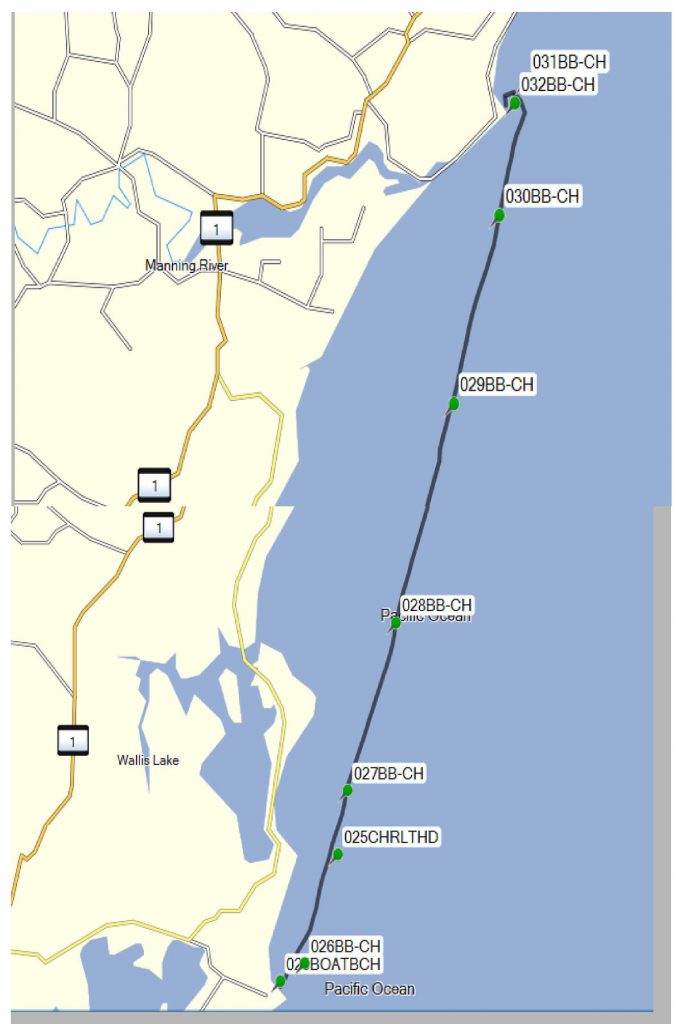 It’s fair to say that some areas of the harbour are rather run down/derelict. There’s a main jetty that is falling apart, but people are still using it for fishing. There are some disused berths since the fishing fleet has left the area, so we stayed in one of those next to the Marine Rescue boat. You’ll see from some of my photos below the state of disrepair. Pylons are breaking up, there’s old rope with barnacles over it attached and a fair amount of rust. Normally, we reverse into berths but this time we went front in – another first for us! We tied up using a lot of our own ropes and fenders, and felt secure. We set an alarm to check the ropes at high tide (around 2am) because this was not a floating dock. Everything was fine although we had risen about 1.6 metres.

Below are a series of photos I took between Boat Beach and Crowdy Head.

This was our longest passage so far, taking nearly 9 hours. We motored some of the time from the flybridge and other time from the pilot house when it was a bit cold or windy. When I wasn’t motoring, I enjoyed playing a few games of scrabble online and reading! The seasickness had abated.

Once again the voyage was made special with frequent appearances from dolphins and whales, although mostly too far in the distance  or too fast to capture on camera. The scenery along the coast is rugged and broken up by long stretches sandy beaches – basically stunning, although photos don’t do it justice.

It was very pleasant motoring along until around 2pm when wind and swell picked up and we were unsure what the evening on anchor would be like.  After securing the anchor, laying out about 40m of chain, and holding the scheduled update with Marine Rescue at Trial Bay, we started to relax a little, although winds did gust up to about 40km per hour, which is a rather breezy! Just like at Boat Beach when we were on anchor, we took turns keeping watch. Below you can see where Trial Bay is located, our route and stats for our passage. 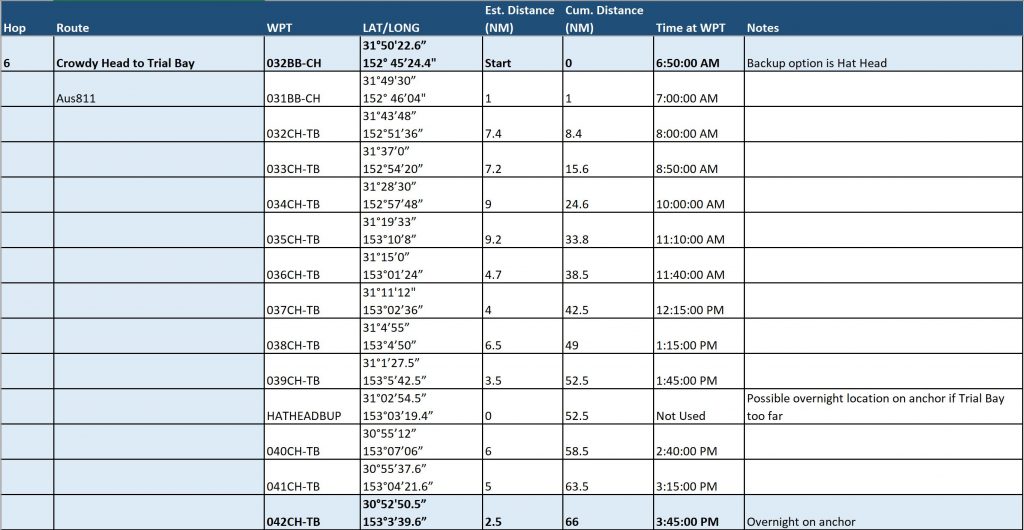 These open road stead anchorages are great when swell/wind is coming from south, south-east, but not so good when wind is coming from the north and swell from the east. And this was what we had! Initially the tide was coming in. We’d start to rock side to side, with it starting off fairly gently and then getting more severe and this pattern would repeat about every 10 -15 seconds. But when the tide changed and it was going out, we had a few hours of calmer weather. It was interesting indeed!

Some points about anchoring

When we were at Boat Beach we just used the short bridle. At Trial Bay we used the long one. This has the added benefit of helping hold the chain parallel to the ocean floor and preventing shock loading on the anchor chain. With the bridle in place, the line slowly stretches and puts pressure on the anchor chain, digging the anchor in. Without it, a gust could jerk the chain and quite possibly pop the anchor loose.

Below are a series of photos I took between Crowdy Head and Trial Bay.

We left Trial Bay just before 7am, keen to reach Coffs Harbour before it got too windy. Scenery was similar to the last few days, again rugged and beautiful. I actually dozed a little en route so didn’t take as many photos!

During this leg, we heard of marine rescue boats, a police boat and a rescue helicopter heading offshore to rescue two people. Apparently their boat sank about six nautical miles off Nambucca Heads. Click below if you want to read about this.

“The men, aged 40 and 70, were about six nautical miles from shore, fishing, when the hull split on their 5.4 metre aluminium boat.

The pair called for help, leading to Marine Rescue NSW being alerted just after 10:00am.

Several rescue vessels searched for the two men, including Marine Rescue from Trial Bay, Nambucca Heads and Coffs Harbour, as well as the NSW Police vessel Fearless and the Westpac Rescue Helicopter.

Both men were wearing life jackets and personal locator beacons, which directed the rescue crews to their location in the water.

Mr Holyfield said conditions were deteriorating during the search, with the wind picking up.

“It’s hard to spot people in that sort of situation,” he said.

Mr Holyfield said the older man was treated by NSW Ambulance for shock when he got back to shore at South West Rocks.

He neither man was injured, but both were taken to Kempsey District Hospital for further assessment.”

Thank goodness they were saved and it highlights the great job Marine Rescue do. We tend to travel about 1-3 nautical miles offshore. To give some context, the boat they were in is about 1/3 the length of ours or just a little longer than the width our width (beam). 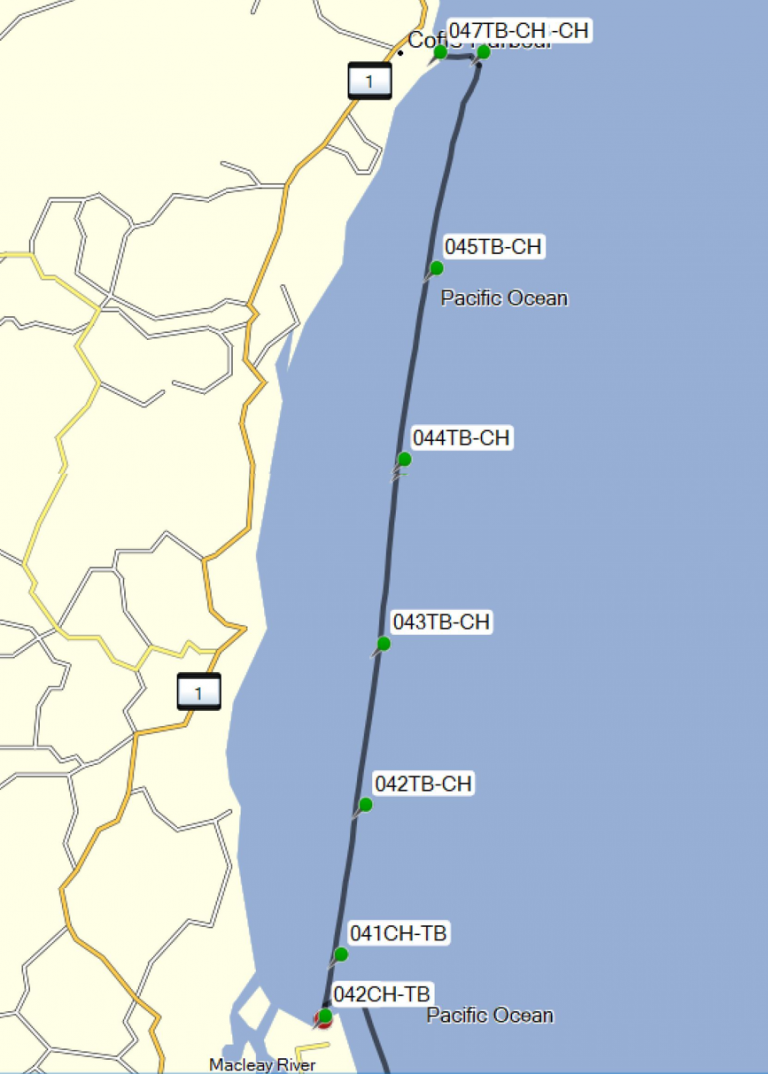 We arrived at the outer harbour at Coffs, logged off with Marine Rescue and contacted the marina for our berth. We’re now on the head of a T-berth and I must say, it’s a lot more relaxing than the open road stead!

Below are a series of photos I took between Trial Bay and Coffs Harbour.

We travelled nearly 200 nautical miles in 4 days, twice the distance that we’d travelled in the previous 6 weeks!

We’ll stay at Coffs Harbour for a couple of weeks before we think about travelling to Yamba. The border with Queensland has closed again so there’s no rush. There are a lot of facilities close including a hairdresser, so I’ve already had a ”covid-correction-cut”!

Now it’s time to prepare my passage plan for Yamba.