Two bars in two days, and not a drop to drink! 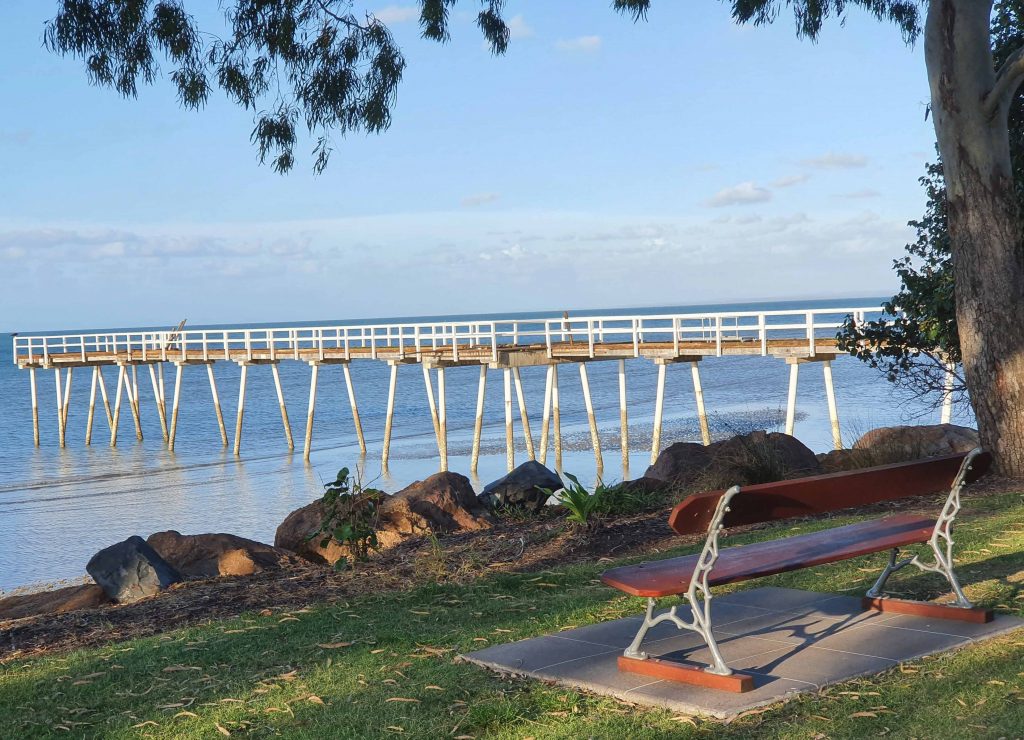 This is about our trip from Mooloolaba to Hervey Bay, which saw us crossing the Mooloolabar bar (for second time) and the notorious Wide Bay Bar. Some describe WBB as the most dangerous bar on the east coast of Australia! So the quote “never go anywhere in a boat that your brain has not been first” that I mentioned in my blog – Manly to Mooloolaba – played on my mind again. Preparation and planning was very important, and I’ll cover this off later.

I should add, our original plan when we started cruising was to be at Hervey Bay around October 2020. Of course, everyone’s plans were disrupted and I’ve really enjoyed spending more time in various places, learning more about our boat, navigating, useful applications, and meeting new people.

We left the marina in order to cross the Mooloolaba bar around 7am. This was about 2 hours before high tide. We chose this time because the Mooloolaba Outrigger Canoe Club was hosting a regatta over this weekend and it was going to be another busy day on the water.

Our bar crossing on this day was, thankfully, the complete opposite of our entry four weeks earlier, which I covered in my blog, Manly to Mooloolaba. This time it was very calm and there were no breaking waves. Probably the only issue were a few kayakers paddling across the entrance so I gave them a warning toot of the horn!

After crossing the bar, we passed by Mudjimba Island, also known as Old Woman Island, around 8am. The outrigger canoe teams were racing to this island but we were there before them. If you want to read about the death, danger and mystery lurking in this island’s past, check out this ABC news article.

We expected to take about 6 hours to cover the first leg to Double Island Point, just south of Fraser Island.

As it happened, we had a 1-1.5m swell coming from the east and while this wasn’t particularly rough, the frequency of the swell hitting had us both feeling quite seasick from the start of our tip. Luckily we weren’t sick (though I was exploring options of which side to heave over!) and the berry ice blocks we’d been recommended provided a welcome refreshment. I’d like to think a day of not eating meant I’d lose some weight, but sadly I made up for it the next day!! Anyway, due to the swell, our progress was a little slower than usual, travelling around 6-6.5 knots instead of our usual 8 knots. And due to my feeling so ill, I didn’t feel like taking many photos of the coastline. Shortly after 2pm we arrived and dropped anchor at Double Island Point.

During our passage, something floating in the water caught our attention. With recent media reports of body parts washing up along the NSW coast, we thought we’d investigate. It appeared to be some fishing gear, but we decided it would be too dangerous to attempt to retrieve it and risk it tangling in the propellors.

There’s a great anchorage area behind a sandbank that had a few catamarans tucked in, although the sandbar does shift so the anchorage area isn’t permanent. But because we were experiencing a spring tide (the tide highs and lows are greater than during neap tides) we didn’t want to risk entering this area and getting stuck on the sand when the tide went out. If you’re interested, here’s a good explanation of spring and neap tides.

We anchored just near the sandbar and had a swim next to our boat, and this was when we started to feel better! The night was a bit rocky, but we slept reasonably well and woke ready for the next leg to Garry’s Anchorage.

Today was the day we were crossing Wide Bay Bar, and while I felt very prepared, I was still a bit anxious about how it would be.

I’d been tracking the wind, waves/swell and tide for some time and conditions looked favourable for a crossing between about 9 and 9:30am. I previously got the recommended/suggested route from Tin Can Bay Coast Guard – by way of four waypoints (lat/long coordinates shown on the image) – that I entered into our plotter. I then used a combination of paper charts and Navionics to plot our route from Double Island Point to Garry’s Anchorage, and was comfortable with the route. I’d also emailed a friend (Brian, who owns an Ocean Alexander – Insequent – who’s experienced at crossing this bar) and he confirmed what I’d expected about the conditions.

So, at about 07:45am we prepared to leave our anchorage and head across the bar. Now I started to feel excited about this, as the conditions from what we could see looked great. When we got close to the first waypoint (about an hour later), we logged on with the Coastguard at Tin Can Bay so they knew our whereabouts.

As I mentioned previously, some say Wide Bay Bar is the most dangerous bar on the east coast. The bar entrance has a lot of shifting sands and is completely open to the ocean. It’s a long bar crossing – taking about 20-30 minutes – and has a section that some people call “The Mad Mile” because it’s about one nautical mile long and seas are breaking right and left.

* The two aerial photos taken on 22 February 2021, by the pilot of the Seair Pacific plane that flies between the Gold Coast and Lady Elliot Island Eco Resort, and copied from Tin Can Bay Coastguard Facebook page.

But is it dangerous? Yes, in the wrong conditions we could see how it would be extremely dangerous. But given that I’m quite risk averse, we were only going to cross if the swell was less than 1.5 metres, winds less than 15 knots, and as close to perfect conditions as possible. And I’m pleased to say, our crossing could really be described as a “non-event”. In fact, compared with the previous day’s travel, it could be considered dead calm!

From Inskip Point to Garry’s Anchorage

After crossing the bar, and feeling very pleased with ourselves, we contacted Coastguard again to log off, and headed through very calm waters from Inskip Point to Garry’s anchorage. We could see a car ferry in the distance, which takes 4-wheel drives from the northern tip of Rainbow Beach to the southern tip of Fraser Island. It’s also worth noting that the port and starboard channel markers have been set for boats travelling from north to south (as per Alan Lucas’ book, “Cruising the Coral Coast”). This means that instead of keeping port markers on our left, the usual convention when you proceed upstream from the sea, we had to keep them on our right. Quite an important point!

Garry’s is a very protected area and often sees people stop here before heading through the straights inside Fraser Island. I was a bit surprised by the landscape heading up to Garry’s anchorage. After looking at charts and our plotter, I had a vision in my brain of a lot more areas of land. The reality was that there were lots of shallow areas, but not matching what I’d envisioned. We planned one night here, and it has a reputation of being bad for mosquitos and sandflies, so I covered myself with repellent and only had a few bites. It was rather hot during the day and I asked on a forum if people swim at Garry’s anchorage. Here are some responses:

“Not me, it’s too murky. Plus it’s a popular anchorage where people fish and throw their scraps overboard – sharks will have learnt that boats provide food.”  “Sharks do” “The crocs swim there”  “Wasn’t even game to jump on the paddle board there lol”  “We always swim there”

I’ll leave you wondering what we did!

Playing the tides was critical for our last leg to Urangan in Hervey Bay. There’s an area where the tides meet from the north and south inside Fraser Island, called Sheridan Flats. On a low tide we wouldn’t be able to pass as it’s too shallow. It’s important to wait and cross about an hour or so before the high tide. This was also based on some advice I also read in Lucas’ book, “Cruising the Coral Coast”, so we would still have another hour of incoming tide in case we got into trouble!

I spent a bit of time working out the high tides, at various points along the way because there’s a lag between when high tide occurs at the bar and then when high tide reaches some of the inland points. After spending some time mapping it out, I finally had a plan for when we should leave Garry’s anchorage, so that we could reach Boonlye Point (south of Sheridan Flats) at least an hour before high tide.

The hour it took to cross Sheridan Flats required a lot of concentration to keep on the route I’d plotted, and make sure we were always in the deepest channels of water. We took the crossing slower than our normal cruising speed, and we did spot a port channel marker that wasn’t visible on our plotter, which confused us a little. (As a side note, we’ve recently updated our Garmin plotter maps and discovered it is a port marker that wasn’t on our old plotter map. There’s a lesson!)

Since I knew it would take about an hour to cross the flats, this meant we’d reach the area of Ungowa just as the tide was starting to turn. About another hour later, we started to see the benefit of an outgoing tide, by reaching speeds of up to 10 knots.

The area to the north of Fraser Island is more aligned with what I expected – wider open spaces and fewer mangroves. We also spotted some anchorages around Kingfisher Bay on Fraser Island, where we’ll visit in the future. We also saw another car ferry in the distance and our plotter showed a number of car ferry routes that we needed to be aware of. We had a great cruise around Big Woody Island, passed Urangan Pier and into the marina.

We have a number of projects and as a priority, getting our boat insurance sorted so we can continue heading north, is among them.

So we’ll be at Fisherman’s Wharf Marina for the next 7 weeks or so, but we’ll be taking some trips to areas around Fraser Island as well as exploring Hervey Bay and surrounds.