My month in Manly 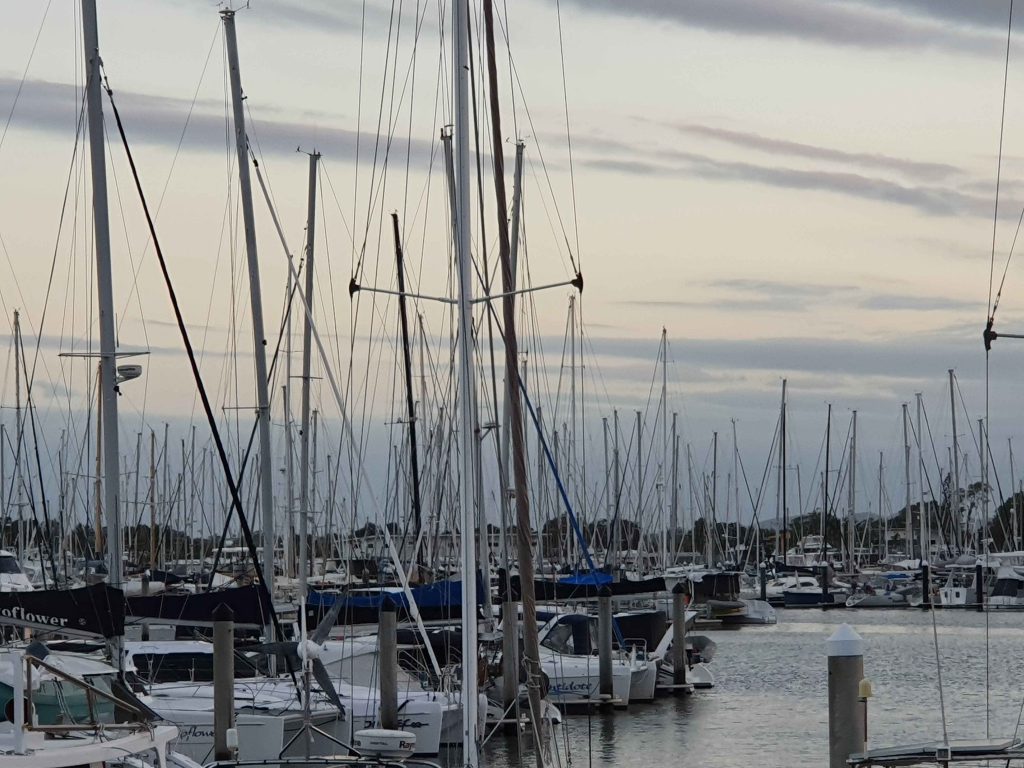 I’m a fan of an alliterative title! Otherwise this post should be “Our month in Manly”.

Despite visiting family in Brisbane often over the past 25 years, I don’t recall ever going to the bayside suburb of Manly. And now that I’ve been there, I’m quite a fan of the area and surrounding suburbs like Wynnum, Thorneside, Lota, Birkdale, Wellington Point. If you want to learn more, you can take a look at the Wikipedia article about Manly.

In this post, I thought I’d describe what we’ve been doing this past month and put together some photos. The month flew by and it was great to catch up with some friends who live in Brisbane, and whose home we went to in December. I must say, we were also lucky to experience only a 3-day lockdown when we first arrived, which I wrote about this in my last blog, Isn’t it ironic…don’t you think?

Through various forums I subscribe to, I became aware of some other Ocean Alexanders in the area where we were staying. This was very exciting since there were only 92 of our model of boat built world-wide (I think 91 still exist today) and we were able to meet up with four other owners, see their boats, and enjoy a few sundowners. There’s another OA on the Gold Coast, which was only a few km’s from where we were previously staying, so hopefully we’ll see them when we head back south. Of the 91, six (at least) are in South East Queensland at the time of writing this post.

I’m sure their owners won’t mind me sharing these pics. You’ll see the hulls all look the same, even though there’ve been some modifications to some of them, hard tops on the flybridge, extension of the aft deck as examples.

There are a number marinas at Manly, resulting in a sea of masts as you look across the harbour. There were always boats coming and going, including dragon boat training, learn to sail groups, and the local prawn trawler. We tasted the biggest and best prawns, direct from the trawler.

We also experienced some intense storms while we were there and I felt quite glad we didn’t have a mast when the lightening flashed around!

We had plenty of choice for dining out and also enjoyed some delicious breakfasts at local cafes. There are a number of shops directly over the road, including IGA, butcher, news agent, chemist and post office. Bike paths, winding along the waterfront, were great as were the children’s facilities of parks and the Wynnum wading pool. I also enjoyed aquarobics and swimming at the Manly pool, just behind our marina, and joining a friend’s mum who showed me the bike paths around Thorneside, Birkdale and Wellington Point. Mind you, the 30km+ cycles she took me on resulted in me feeling extremely knackered later in the day!

Manly also has a very well-stocked chandlery over the road from our marina, which Robert frequented often for various boat bits and pieces. Service there was great and it was no trouble for them to order a part in, if required.

Boat projects – an ongoing part of living aboard

After seeing some of the other Ocean Alexanders and the changes they’d made, I was delighted when we installed gas struts on the hatch between our flybridge and pilot house. The old struts were metal poles and a thumb screw that you would tighten to keep the hatch open. Sometimes this would vibrate loose and the hatch would slam shut. I was always expecting it to hit my head. But with these new gas struts, the hatch is so much easier to open and shut, and more importantly, safer. We’d also seen the rub strakes on Insequent, and this reminded us that we had some of these (and now we knew what they were for!). After cleaning them up, they’re now installed on the caprails and stop  the fender ropes from damaging the rails.

About 4 years ago, we had some covers made for our aft deck (back of the boat) and we had a seam sewn in with the idea that we could use one section to create extra shade by inserting a metal pole and propping it up on the caprails. Well, I’m pleased to say it only took us 4 years to finish this project!

Ever conscious of where to store things, I decided to make a new veggie storage net, similar to what I’ve seen on yachts. I think it works well but note that we don’t really need it to swing, as yachts that lean might.

I’d previously mentioned that we were experiencing issues with our generator, which got worse when we were in Iluka, and I wrote about this in my blog, River Ramblings. I’m pleased to report that after some work done by a mechanic to flush the heat exchanger and then Robert replacing some parts, (fingers crossed) we seem to have resolved the issue. It also helped that Robert installed some more gauges so we can now see information, including exactly when the water is being heated, something we didn’t have visibility of before, of also manage our power consumption and battery charging more effectively. If you’d like more technical details, please leave a comment below and I’ll ask the brains trust to reply!

We decided to hire a car and do some shopping as well as take a day trip to Toowoomba. Toowoomba is the second most populous inland city in the country after Australia’s capital of Canberra, with more than 150 public parks and gardens. I could have spent a lot more time there. We had a very pleasant day with lunch, visiting the Cobb & Co Museum, Queen’s Park and Botanic Gardens, Picnic Point & Tobruk Drive Lookouts and looking at some of the historic architecture on Russell Street.

After a month at Manly, we’re spending a few days around Moreton Bay before heading to Mooloolaba. We’ve been watching the weather and Sunday 7 February is looking good for us to go.