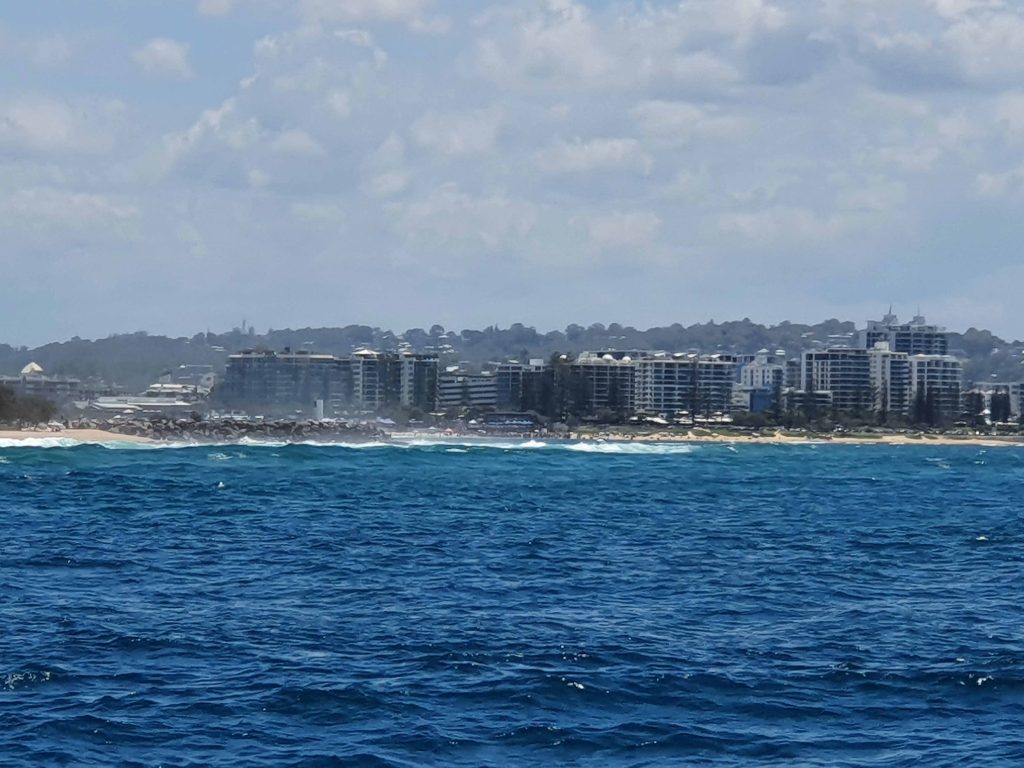 After a month in Manly it was time to leave and start our travels north to Mooloolaba. But not before spending a few days in Moreton Bay.

Our first anchorage was Deanbilla Bay just off Dunwich. Dunwich is towards the northern end of North Stradbroke Island.

While there we enjoyed sundowners with friends on their Ocean Alexander, Sealeaf. I kayaked, we both swam, and we also took our tender over to Dunwich, where we caught a bus to Point Lookout, or Mooloomba – the original name that Aboriginal people used for this area of Quandamooka country. The North Stradbroke Museum has the original place names displayed in the Quandamooka Language Map.

What I also found interesting was a short video narrated by Quandamooka songman Josh Walker. If interested, have a look at the story of Mooloomba.

Point Lookout is heritage listed (2004) and has an amazing boardwalk (stage 2 officially opened in 2012), which winds around the headland. It’s become a popular spot for whale watching and seeing other marine life like turtles, porpoises, and sharks. The walk takes about 30 minutes. Dunwich offers more to see and do. We only had a couple of nights, so we’ll revisit the area when we return south.

Photos to and at Dunwich

Our next anchorage was at the Sandhills towards the southern end of Moreton Island (map). The area is picturesque, the sea was crystal clear, there was plenty of room to anchor, and we enjoyed jumping into the water from the boat.

However, at the time of writing this post, I read that on Sunday, a member of the Moreton Bay Game Fish club tagged and released a Bull Shark at the Sandhills. It was 9ft, 4.5ft girth, 173kg!

I also went out in the kayak while Robert did some engine checks.

During our motor from Dunwich, he noticed the port engine oil pressure gauge was flickering through a greater range than anytime previously experienced. When we reduced the throttle from 1500RPM to about 1100, the gauge reading settled down. While not causing us major concerns (as various articles about our engines indicated this was still considered within a “normal range”) any change from “our normal” is reason to think something could be going on so Robert will check into this when we get to Mooloolaba. While at the Sandhills, he topped up the oil and this also seemed to improve the reading of the oil pressure. After our night at The Sandhills and thoroughly enjoying a few nights on anchor in Moreton Bay, it was time to head north to Mooloolaba. This was partly dictated by the weather and I’ve included a few screenshots to show why Sunday was the day.

On a positive note, it seems that our generator issues have been resolved so we’re looking forward to longer periods of anchoring out as we head north.

There’s a quote I read on another blog “never go anywhere in a boat that your brain has not been first” (author unknown).

I think that I had sufficiently planned and prepared for this trip, including checking the weather, listening to other people’s experiences, planning on our charts, checking the route using Navionics, looking at pictures of the bar, and contacting the Coast Guard to discuss the bar approach. They gave me a couple of waypoints – longitude and latitude readings – that was the advised path to approach Mooloolaba. As it turned out, I was quite pleased that my route pretty much followed the same direction.

The estimated distance was 44 nautical miles, which would take us about 5.5 hours at 8 knots. We decided to add an hour as we planned to go a little slower on the port engine because of the possible oil issue. We set off around 7:30 am. As it turned out, we still averaged close to 8 knots and could have stayed at Sandhills for longer!

Our trip was very pleasant, and we stayed on the flybridge for the whole journey. When we travelled from Yamba to the Gold Coast, we’d experienced seasickness. I bought some Travel Calm tablets with caffeine (so they wouldn’t make us drowsy). It’s just as well we tested them before leaving Manly. On the test run, I took one first thing in the morning and fell asleep before midday, got up for a while and we both slept in the afternoon. Needless to say, we won’t be using them for seasickness, but maybe if I want a good night’s sleep!! However, we were given some tips from various people to suck on ice blocks and barley sugar lollies. We did both and didn’t get sick, but it could have been because it was pretty calm.

The trip to Mooloolaba was uneventful. We spent some of the trip in the shipping lane, although we did leave it to the ships who were using it as part of their route north or south.

We’d been told this is one of the easiest bars to cross. Whether it was the swell/waves, the shoals, the dredge sitting in the channel, kayakers, jet skis, and the narrowness of the channel, we found it more challenging!

We followed our route and approached almost at right angles to the western wall. This meant we faced the swell/waves head on and there were regular sets of about four at a time. We were going up and down over the waves, and I guess the movement was accentuated by being higher up on the flybridge. As we passed the western wall and timing it for a pause in the waves, we did a sharp turn to starboard (right) and once inside, it was calm. This was the first time we’ve ever had wash over our decks!

However, Robert handled it beautifully while I kept checking for obstructions around. Also, there was never a question that Poseidon couldn’t cope, and we believe our approach was perfect. Had we gone straight in between the rock walls, the swell would have been hitting us side on and I think that would have made us feel like we had less control and we certainly would have been rocking around a lot more. If you want to see a different boat’s experience crossing the bar and being hit side on by the swell, take a look at Markarna going across Mooloolaba Bar.

From when we started our approach, everything happened very quickly, and was over before we knew it, so I didn’t get any more photos at the time, but I went back the next day when conditions were similar and took some pics to help show you what the water was like.

Settling into the marina

We arrived outside normal business hours and our keys were in the marina safe (we’d been given the access code), so we had keys for the amenities. We tied off our lines and went for a late lunch and to debrief on our bar crossing and coming into the marina.

Early Monday morning, while I was in the office finalising paperwork, a staff member went to see Robert saying we were sticking out of the berth too much. To be clear, we’d advised them we were 15.25m and they put us into a 15m berth. After some discussion, we were assigned to a longer berth and agreed to move when the winds had calmed down. This was Tuesday morning (9 Feb) around 7am when they tide was slack (that is neither going in nor out) and wind and wind gusts less than forecast for later during the day, which were in excess of 50km/hour during the evening.

We’ll be here for a few weeks as we have some things we need to do and friends to see. Then we’ll start our trip to Hervey Bay. That gives me about a month to plan our crossing of the Wide Bay Bar at the southern end of Fraser Island. So plenty of time to get my brain there first!