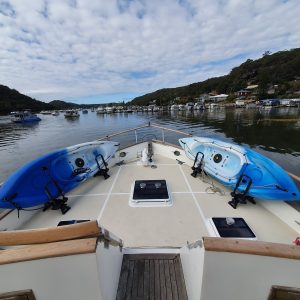 In December 2019 we started a refurbishment of our boat’s foredeck and we finally finished mid-May 2020. Our foredeck refurb included:

Some people are passionate about keeping teak decking and maintaining it to a pristine condition. But the teak on our foredeck was 40 years old, had been screwed (not glued) into the fibreglass – leading to issues of water ingress – and was basically wearing out. When it rained we’d experience leaking in the cabins and bathroom below, especially around the hatches. The caulking was coming out, and was generally in very poor condition.

Some people will also groan that we’re not keeping the teak on the rails to a polished state. We tried it and it looked amazing – for a while – but it really doesn’t last much longer than about 6 months, especially in the harsh Australian climate. I’d made covers to protect it from the sun – which kind of defeated the point of having beautiful brightwork – and we questioned why we were spending so much time sanding and oiling it only to then cover it up. We decided that the best option for is to keep it clean and let it do what nature intends.

I’ve explained the process below, with lots of pics. You can expand the sections if you want to read more.

Removing the old teak deck involved levering the boards, scraping off & sanding the black bedding compound. (Note, photo showing first stages is from a different area of the boat that we did previously.) Then we removed every screw, drilled each hole to expand it, before filling with epoxy stuff.

Previous
Next
Laying the thermolite boards

Robert made cardboard patterns for what was like a jigsaw of pieces to cover the deck. This was to ensure that when he cut the thermolite board they would fit correctly. Then we layed out all the boards into the correct positions and marked the edges with tape so we knew where to position them once the epoxy glue was applied.

The glue is a two-pack epoxy that goes off in about 30 minutes under normal conditions but on this day it was going much faster. We mixed it then I quickly trowelled it to both the board and the deck. It was a very long, hot day and I think I got sunstroke! Then, due to me being a little too liberal with the glue, we ran out with about one board to go – bugger.

Previous
Next
Filling the gaps and painting with prepcoat

Once the boards were secured in place and the glue had hardened sufficiently, we had to fill all the gaps and screw holes. (Oh and we had to sand it several times, but once this was done, we were watertight (except for the hatches).

Then it was three coats of prepcoat (because the board we used isn’t UV stable until painted) and then ready for the next stage. But once this was done, we could leave it for a while before progressing it. So this gave us time to work on the hatches!

Previous
Next
Fixing the Bomar hatches

These hatches are the same age as the rest of the boat and over the time, they started to leak. Knowing we were going to do the foredeck refurb, as a temporary measure I made some covers out of sunbrella fabric which is close to being fully water resistant. This helped over a few years!

Basically, Robert rebed the three hatches first. This was a bit of trial and error and waiting to see what happened when it rained. Happy with that job, but still getting some water leakage, we started looking to replace the perspex. After a couple of expensive quotes, we found a place locally (Gosford, NSW) where they’d use our existing perspex as a pattern and cut new ones that we could then replace. We decided this was the way to go. For a week or so, we had no hatch covers (while they were being used as patterns) so out came the old sunbrella covers again.

Once the perspex was replaced, we just had to get new vents, then do some painting. I also replaced the flyscreens, that I previously wrote about in my blog, replacing the escape hatch flyscreen covers.

Previous
Next
Planning the layout for the decking paint

It’s a good idea to break the deck into sections, so that:

We taped where we thought the lines should be, adjusted a little, then drew pencil marks to identify where to paint several coats of white enamel. We painted a little wider than required. Once fully dry, we applied tape again, in preparation for the next paint.

Previous
Next
Painting the deck with Tredgrip

The product we used was Tredgrip, which is a rubberised, non-slip paint.

We then put tape over the white enamel paint to preserve the lines after painting. Prior to doing this, however, we did a test section on a small piece of board to ensure the tape didn’t lift the enamel paint off when it was removed.

Then it was three coats of tredgrip, brushing second and third coats at right angles to the coat before.

After the Tredgrip paint was fully dry, we carefully removed the tape. Then we installed the kayaks – we discussed a few options for where to locate them and this seemed the best – and there you have it!

Note, the deck is not free from maintenance. It will show the dirt, so needs to be hosed down and cleaned with detergent and a light brush/broom regularly. The paint can easily be touched up and there are a couple of spots where it didn’t bond properly that we need to fix. But overall, this is a great alternative for us, and is fully dry of any leaks. Those ‘teak diehards’ will be pleased to know we’re keeping some of the teak decking and caprails as well!